The 10 Best Cities to Live in British Columbia 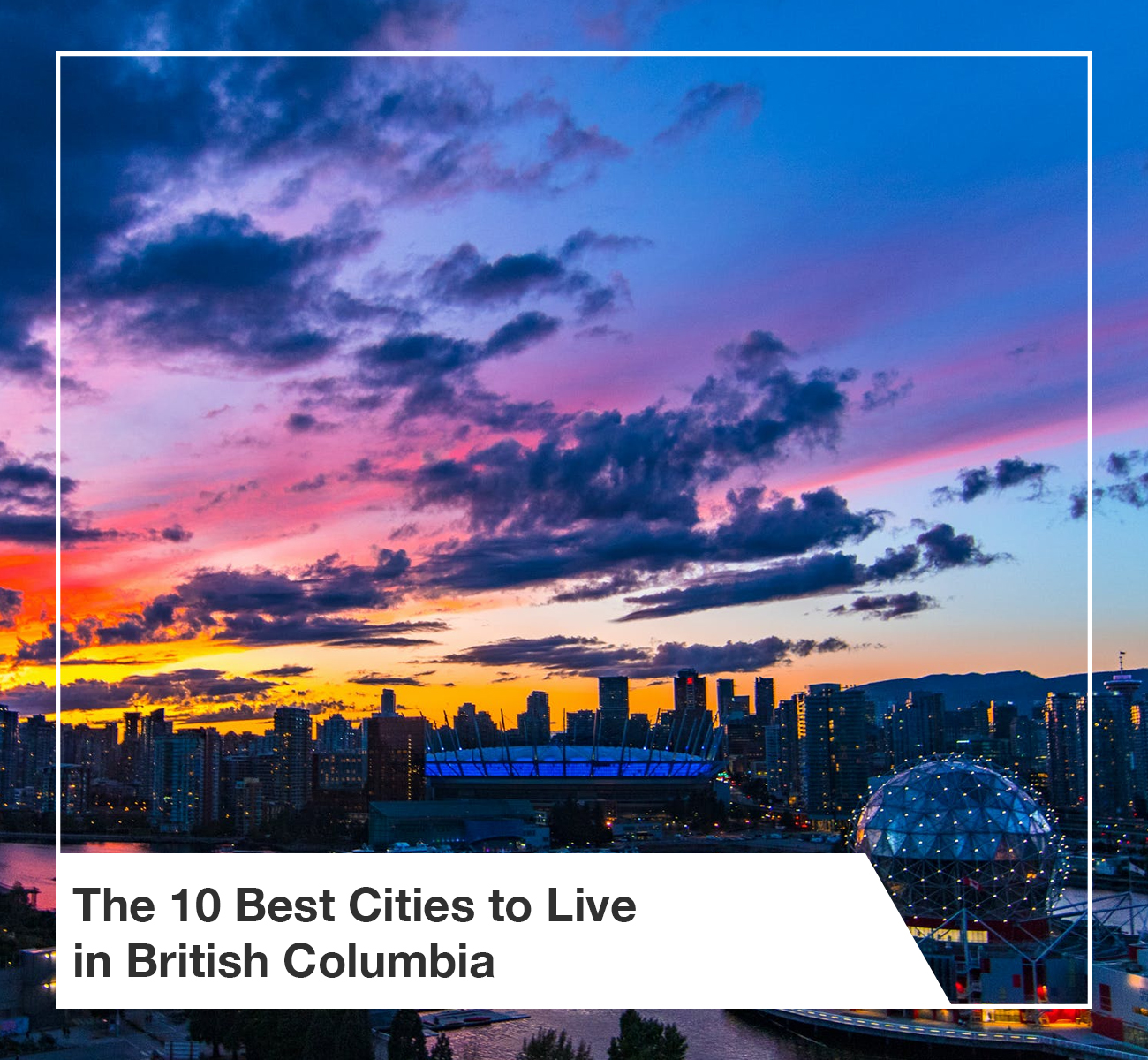 British Columbia is a beautiful province that is located between the Pacific Ocean and the Rocky Mountains. It is Canada’s westernmost province and has the third highest population after Ontario and Quebec.

The geographical features of B.C. are very diverse, and include sandy beaches, majestic mountain ranges, lush forests, inland deserts, and grassy plains. All of these features combine to make this province one of the most popular destinations to visit in Canada, and the high standard of living, as well as the exceptionally low unemployment rate, make this province a much sought after place to settle down and establish roots.

The list below outlines the 10 best cities to live in this magnificent province.

Perhaps the most well known city in British Columbia, Vancouver is the largest in population and is consistently named as one of the best cities in the world in terms of liveability and quality of life.

Not only does Vancouver boast some of the most amazing views of nature, with the Rocky Mountains and the harbourfront that are able to be seen from almost everywhere in the city, it also is known for having a mild climate all year round, with little to no snow in the winter.

However, if you’re someone that loves winter and the snow, there is no need to worry. There are several world class ski resorts that are only 2 to 4 hours away from the heart of downtown, so you can still participate in winter activities, even in the summer!

This gorgeous city is located in the Okanagan Valley, which is well-known for having some of the best vineyards in the country that account for over 90% of British Columbia’s wine production, as well being home to the stunning Okanagan Lake.

With the winters being mild in Kelowna, the lake never freezes over, meaning that you will often find people out and about on the lake all year round. Beyond the recreational activities that are in abundance in this city, there is also great healthcare, education, and entertainment available to the residents that live here.

Victoria is the capital of B.C. and is located on the very tip of Vancouver Island. This charming city is the oldest city in western Canada, meaning that it has a ton of historical sites, such as Canada’s oldest Chinatown, and a deep rooted sense of culture and heritage.

Victoria’s number one industry is the technology industry, and with over 900 tech companies situated in the city, it has even been nicknamed “Tectoria”.

Victoria attracts all types of people and has a wide age demographic and a ton of job opportunities, in addition to its warm climate and beautiful sights. So whether you’re looking to retire, or to start a family here, there are amazing opportunities for everyone that decides to live in Victoria.

Surrey is the perfect place to live if you have a growing family, as there are so many things to do in the area, as well as being only 23 kilometers from downtown Vancouver.

As it stands, Surrey is the second most populated city in British Columbia, and is constantly growing. Because of this, new developments are always popping up, so there are many places to move to in this city. Housing in Surrey is much more affordable than in Vancouver, but is close enough that many people are opting to move to Surrey and commute to work instead.

Along with being in a prime location, Surrey is also home to beautiful forests, as well as 600 parks and 277 trails to explore. Living in Surrey means there will always be something for you and your family to do, whether it’s going on a family hike or picnic or attending one of their many festivals throughout the year.

Nanaimo is located on Vancouver Island and their official nickname is “The Harbour City”, coined by Prince Charles and Princess Diana during a visit to the city in 1986.

With a great community of people, tons of outdoor activities to do, and affordable housing, it’s no wonder why so many people are choosing to relocate to Nanaimo every year!

Related Post: The 10 Best Small Towns To Live In BC

Whistler is most well known for its famous ski resorts that attract people from all over the world. Despite being known as a tourist town, there are plenty of opportunities to settle down and call this small town home.

Not only is Whistler a place with an abundance of outdoor activities, it is also a place where you will find yourself deeply connected with nature. And even though you’ll be located amongst the mountains, away from the city life, Vancouver is only 2 hours away, so you can still visit anytime to get your fix of the big city action.

View All Homes For Sale in Whistler, BC >>>

Burnaby is British Columbia’s third most populated city, and is only 15 minutes away from downtown Vancouver by SkyTrain.

This city is absolutely beautiful and has a ton of trails, parks, freshwater lakes, and mountains, providing lots of outdoor activity options for those who love to be in nature.

For people who are looking for an education, Simon Fraser University is located in Burnaby itself, while UBC is less than 40 minutes away by SkyTrain.

Richmond is a great city to live in with a richly diverse population and has an abundance of job and education opportunities. It is centrally located and is not far from

Vancouver and Burnaby, as well as being home to the Vancouver International Airport.

On top of being located on a beautiful waterfront, it also has a large number of trails and parks, which makes it easy for residents to go out and enjoy nature.

Despite being located along the Thompson River, Ashcroft’s climate is one of the driest in Canada. The summers are long and hot, and the winters are short and never get unbearably cold. In fact, residents will rarely have to bring out their shovel as it hardly ever snows in Ashcroft. This small town has a very laid back mentality and is a great place to raise a family or to retire in.

View All Homes For Sale in Ashcroft BC >>>

Located in the heart of Metro Vancouver, Coquitlam is a modestly populated municipality that is home to theme parks, shopping centres, great restaurants, and several parks and trails. In addition to lots of recreational activities, there are some fantastic schools in this city, with many schools offering French immersion. Coquitlam is a unique place that offers an endless amount of things to do, in rain or shine, winter or summer.

No matter which neighbourhood you choose to relocate to, you’ll be sure to be greeted with gorgeous scenery, access to the ocean and the mountains, richly diverse culture and history, and friendly citizens. With all of these factors, plus the high quality of living and ample job opportunities, it’s no wonder British Columbia is consistently rated among the best places in the world to live!

Kevin Scharfenberg takes pride in guiding you through the buying or selling process, making himself available is a top priority. If you are looking for a Realtor® that will ensure you receive the best possible experience and that always puts your needs first, then Kevin Scharfenberg is the Real Estate Professional for you!

Thinking about buying or selling? Let’s get in touch!

Search for Your Home